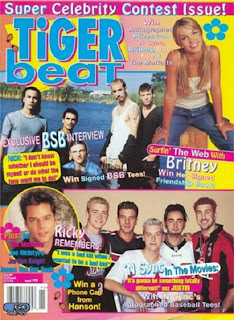 What makes a song a part of the “teeny bopper” pop genre? Could it be because of how catchy it is? Or was it because all the boys in school hated them for how often they were mentioned by the girls in their classrooms? Or because they thought they were too cool for this type of music? Well it definitely is because of their thousands of teen audiences fangirling over their music but it is also the fact that it consists of a catchy, repeating beat and “meaningful” lyrics that grab our, well really teenage girls, attention.

From their funky outfits to their amusing dance moves these New Kids On the Block are the definition of teeny bopper pop music. This late 80’s boy band made number 3 on the Top 100 Billboard Chart in 1989 with this song. In “You’ve Got It”, they admiringly sing to their love interest, which makes it seem like they are singing to every teenage girl herself, about how she has “got the right stuff” and she is the only person they need.  This could be one of the reasons why they are considered teeny bopper because they caught the attention of all these teen girls, making them believe they are the ones these new kids would fall in love with. The song starts off with this electric piano and drumbeat that gets you ready to dance just like they did in the music video. The tempo is pretty consistent until just right before the chorus when they slow it down allowing the boys to sing in a serenading voice.

*NSYNC is another boy band with interesting synchronized dance moves and were once very popular in the 90’s; but things soon ended when Justin Timberlake decided to go solo. In “It’s Gonna Be Me” all five boys sing about how this girl keeps getting hurt with every guy she is with and will not get in a relationship anytime soon but inform her that when she is ready to love again it will be one of them who will sweep her off her feet. Teen girls everywhere were mesmerized that Justin Timberlake would do such a thing.

In the 90’s and early 2000’s Britney Spears was known as the princess of pop. “…Baby One More Time” is one of her hit singles about ending things with her love interest but then soon realizes how big of a mistake that was. Any little sign of him wanting her back would wash away her regret. A lot of young girls can relate to these lyrics; even if they have not faced heartbreak a lot of them will still sing it in hopes that their crush will like them back.


Justin Bieber was once a very charming boy until he decided to egg someone’s house and say some pretty ignorant things. Before he sang a lot about his heartbreak with his first love he use to sing a lot about how he would be the perfect boyfriend if the girl just allowed herself to let him “inside her world”. This song is a little similar to “It’s Gonna Be Me” in terms of getting the girl. Bieber sings about all the romantic things he would do with this girl and how she would be known as his “One Less Lonely Girl”. The tempo is slow enough for the teen girl listening to the song to instantly fall in love.

5. Cool It Now by New Edition

Another late 80’s boy band, New Edition, sing again about wanting their love interest. One of the boys has a huge crush on this girl and often dreams about being with her but his other band mates tell him to “Cool It Now” that it is just a crush. But that does not stop him; he is too in love with this girl to even care what his friends are trying to tell him. The fact that he ignores his friend’s opinions on the consequences of getting involved with this girl makes it very captivating for teen girls. It makes them believe that any guy would risk it all for love.